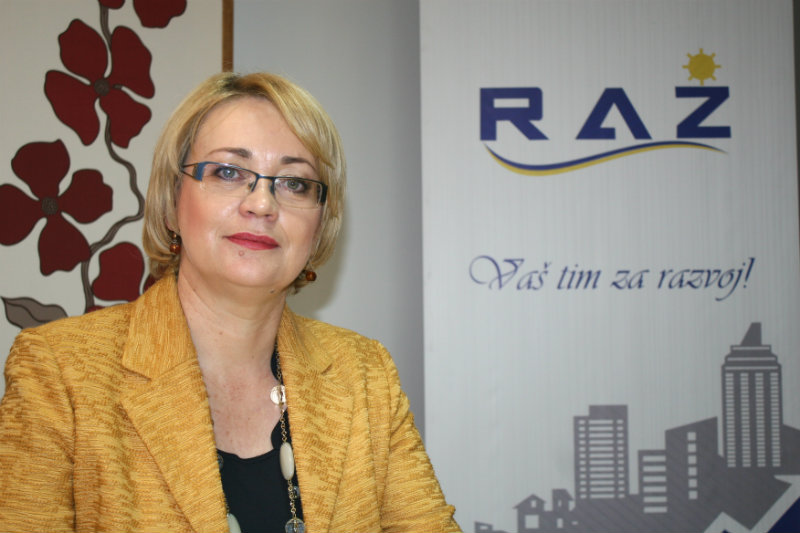 Branka Janko has headed the Žepče Development Agency since 2010. For many years she had worked as a journalist and journalism is her greatest love. She worked for various media, print and radio, only never on television. She also worked in the NGO sector, was the first head of a business incubator, then an agroincubator, and sometimes she says she should write a book „All My Beginnings“, because she is often involved in ventures until they get off the ground.

The municipality is the founder of the Žepče Development Agency. It is not a development agency that exist just for its own sake. And they are getting such good results. They have implemented more than 50 projects worth nearly 9 million KM. They work with clients, and on creation of entrepreneurial infrastructure. They provide business information and consulting services, various trainings and business linkages for over 900 clients every year. They are an important part of rural development and agriculture, and they organise educational events and advisory sessions on these topics, prepare project proposals for domestic and foreign donors, organise production and they are promoting it by organising the Raspberry and Honey Day and the Green Markets.

The Investor Centre, whose purpose is to provide quality, swift and reliable services to investors in the Žepče Municipality, is part of the Agency.

The results of their work are obviously felt, so there are many who could learn a lot from this development agency, and from the Žepče Municipality itself.

It is really a local agency that runs, manages, creates local development in all its aspects, from development of strategies, their implementation, monitoring, to projects, both infrastructural and developmental, both for the municipality, and with various public institutions. A part of the agency is the Investor Centre, which works for companies in diaspora, companies from abroad, as well as domestic firms. They provide a spectrum of services from information, business plans, as well as projects, all those which a firm needs when it is about attraction of financing for those segments.

Do you have, I do not know how possible it is to make an evaluation, what the effects of your existence have been and everything you do for the development of the municipality.

Do you know how many new firms have been created?

In principle, we do not work with startups. We work on creation of favourable business environment, but these were more infrastructure projects. Projects such as IFAT, for four years, that was the construction of the large town market, the place for trading. Then we ran rehabilitation of schools. Effectively, all school buildings that were rehabilitated, this was from the projects we managed. We applied to embassies, then we needed road and water supply infrastructure. So those 8 million KM went mostly for infrastructure.

For instance, now we brought three UNDP programmes to the municipality. We made sure the municipality embarked on those projects, we applied, competed and passed. Those projects will go on for the next four, or five years. Each year we will receive some donor funding. On average, it will be some 128,000 francs per year, from just one grant. So, when we add them up, they will bring a lot of money. Plus we also monitor those projects and work on their implementation.

With regard to new business startups, we can measure the favourable business environment. Off the top of my head I do not know the figure, but I think that, over the past year or so, some 20 startups were created. In our business zone we have three companies, there we brought in new investors, we are still in negotiations with an investor from Croatia, so we have a positive trend there as well.

I keep saying that there are things that we on the local level cannot change, unlike the canton, or the Federation, but where we can make a difference, we are trying hard.

Journalists lost the right to think. We all have become, I am going to include myself, we have become mere conveyors of information. And another thing – we either have journalists who just criticise, always look for the negative side, or we have… In other words, we do not get the middle. I am not in favour of mud slinging, unless well-argumented. But then it is not mud-slinging, but uncovering facts, and that I respect, I respect such journalism, and that is how I did it. But we lost that thing – I like to have two sides in my texts. We lost objective journalism. This is because journalists habe been put in a situation to be poor, to hardly receive any salaries.

I keep saying – journalists should not lose their objectivity. If you are in that line of work, you do not have to be a graduate of journalism, but you must report objectively. The minimum of information must be conveyed if you do the job. You simply must give your audience a sense of that.

I know that entrepreneurs do not want to talk. I can tell you why they would not talk, we had a situation. Because, while this may be unjustified, but it is there, because of envy. There is always someone to make a report on an entrepreneur, and then an inspection arrives, so people are afraid. Although I do not justify it, if you are already doing the work, publicity should be free.

In my opinion, the media could do much more to help develop favourable environment through positive stories. Much more.

And I am sorry that editors to not see this. I am also mad against TV stations. A journalist cannot come from the Federation TV unless an editor approves. Say, they did not come to the Raspberry and Honey Fair, where we had 60 trade show participants, including from Zavidovići, and Tuzla, so not just from Žepče. In the time when raspberries are a hot topic, you don’t come. Funny. And then, instantly, you don’t get BHT either.

Emina Talić Hakanović, “Abakus” Zenica: She created a job for herself...

Cyber Bosanka - September 29, 2017 0
Hana: This is a story that demonstrates that it makes sense to dream and to have wishes, to trust yourself and your knowledge and skills....