Cyber Bosanka Hana Kazazović
Home English Dragan Sjeničić – A humanitarian organisation Srcem za Modriču as an example that our people, wherever they are, wish and can help their home country

Dragan Sjeničić was born in Modriča, but he has been living in Switzerland over the past 10 years. There, he established a humanitarian organisation ”Srcem za Modriču – CH” together with his friends. It is registered in Switzerland and it quickly got new members, so that now there are 200 families that are financing projects they work on through their membership fees.

A year ago they realised that there was a growing need to act in Modriča, too, so that they established a humanitarian organisation ”Srcem za Modriču – MD”, which was registered in Banja Luka. It mostly gathers highly educated persons that are actively involved in the work. Membership fees are used to finance activities, and 20 companies joined recently as sponsors. They also have 25 young persons that assist the organisation by volunteering in the field.

This is a beautiful story and a great example of how persons that left Bosnia and Herzegovina still can help their home country and continue to do so. It is a great potential that can bring many good things for all of us. It is only a matter of to what extent one will be able to understand it and use it. It does not always have to be financial assistance, frequently contacts and knowledge can invaluable.

You have already had many activities that attracted a lot of attention?

We had both small and large actions, around 150 of them over the last five years, and I would stress the activity involving 300 humanitarian packages. Last year, they had a value of 100 KM, and before that they varied from 100 KM to as much as 500 KM, depending on the size of families and to what extent they were socially disadvantaged. We ensured treatment for 12 sick persons. We helped with various excursions. We helped build 12 bathrooms, both renovations and completely new ones. We had an activity in the village Koprivna, where we found children and their mother sleeping on the floor, they had nothing. In their case, we had to install water, make floors, build a bathroom, buy a stove. They needed everything, and I believe that it was one of the largest activities, which amounted to more than 10,000 KM.

We had a similar situation, the local community Miloševac and the family Vidaković, whose son is one of the best computer expert in Bosnia and Herzegovina, although he never saw a stove, not to speak about a computer. We had a full intervention in their case as well, and their father finally took two orphans to raise them in order to assist the Centre for Welfare and all of us. We also had a large activity, which unfortunately ended tragically for Dijana Bijelić. 100,000 EUR was gathered, she was sent to Turkey for treatment, where she was sent back from and she died here as a result of her disease.

There was also the case of Nebojša Blagojević and kidney transplant surgery in France. In his case, we gathered 12,000 KM in an activity that included stars from Pink TV, Jelena Đurić from Modriča and Damir Brdarević from Zenica. All the money went through us, but on that night, we gathered 12,000 KM and that is treated as the greatest financial action in Modriča, in case of which volunteers were preparing the event for a month.

In our case, any politics, religious, national or any other type of hatred is strictly prohibited, because we help all people. Our key classification is only based on the level of disadvantage and nothing else.

Have you obtained offices?

Yes, several days ago, from our members and financiers, family Jelić, the family of the late Milan Jelić. We got his office at the stadium, including furniture and everything else.

There was also the story about the Marković girl from Geneva. She has a very good life there, got recently married. Her husband and her parents wanted to buy her some expensive bags as a birthday gift. She called me and asked whether she could donate a bathroom for a family, she did not want the bags. So, that it now starting to be a tradition. After her example, persons started dedicating birthday money to some sort of assistance, packages, or even directly investing it in bathrooms or houses in case of larger investments. There are some incredibly beautiful stories, people are grateful.

It is a good thing that people that left Modriča have not forgotten their fellow citizens from Modriča and that they are trying to help them in spite of the fact that they live abroad.

Of course. We all socialise there, we all know each other, and all these persons are well off, their children have completed their education, are successful young men and women, but they have not forgotten what it means not to have anything, what their home country means. Because of the fact that, although we live well there, it is nevertheless a foreign country. Most of us at the organisation have Swiss documents, but one’s home country stays one’s home country. And we see that we can do even more.

This is exactly what I wanted to ask, do you have other ideas and are you willing to help?

We can do much more. We have it in our programme on the website – from weekend settlements, for which we had donors at the monastery in Duge Njive, over a dog shelter, soup kitchen, to mini museum, we have lots of ideas.

Activities of this humanitarian organisation can be found at: http://srcemzamodricu.org 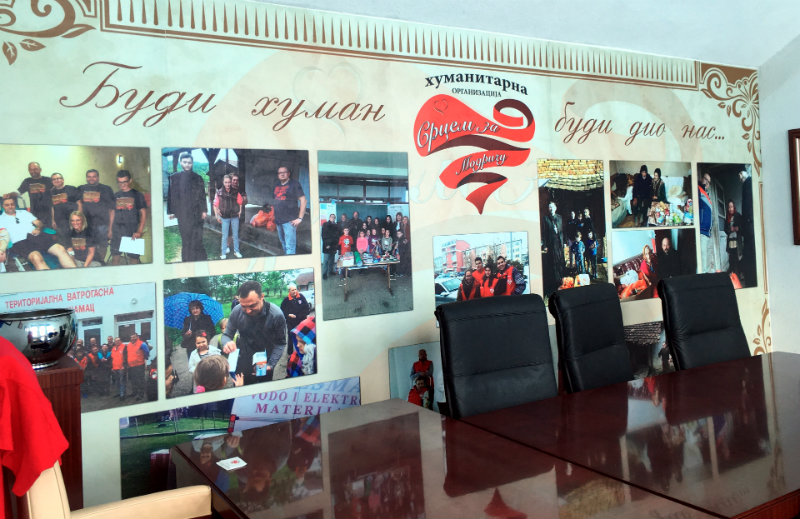