Cyber Bosanka
Home English Mario Soldo – Neum: ”My only dream is to dedicate myself to... 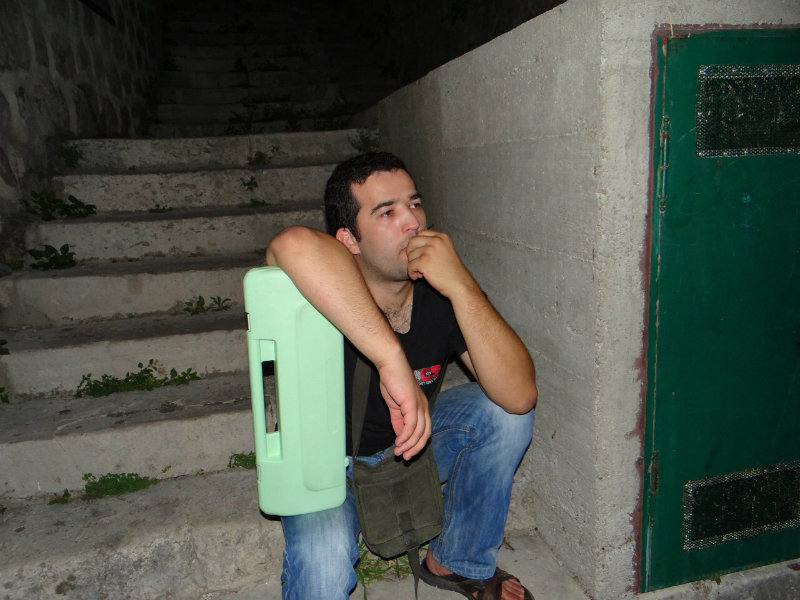 When I spoke with persons from Neum that I managed to find through the web, and asked them who they would recommend me to meet in their town, they all told me one name – Mario Soldo. Luckily, Mario had time to see me and meet me. I have to admit that it became clear to me very fast why everyone recommended him, just as I realised that a single text or audio interview are in no way sufficient to present everything he engages in and what he has done so far in Neum.

Everything that Mario does aims to enrich the social events in town and is humanitarian by nature. He started doing this a long time ago and he felt what it meant to help someone and get honest gratitude in return, which is a feeling that makes him continue working. He engages in music, is in charge of choirs, orchestras, teaches children and youth, organises charity fundraising events in different ways, he was in Tanzania twice for a humanitarian mission and he will certainly go back again. He does all this in his free time, after work, and he works as a system administrator at the Grand Hotel in Neum.

Over the past 20 years, in my free time I have been engaging in music, in charge of choirs, organising different concerts, humanitarian actions and various plays. All of this actually involves social activities that are truly lacking in Neum.

It all started in 2000. As we are a small town, if one does not enjoy the support of the local authorities or an entrepreneur, everything boils down to activities organised by religious institutions. In our case, it was the church that gave the initial impetus, instrument, and encouraged us to exercise, to work. That was the time when my first team gathered and we worked, played, sang and recorded a CD.

And, of course, once you record it, there is a promotion, and you get to know many people. On one occasion, we were invited to the Caritas centre Holy Family in Mostar. We went there to socialise with their members and back then I met the little Slavko. This is what we all call him – the little Slavko. Back then he needed a surgery of his spine. We were delighted how serene he was and how well he took it all and we wanted to organise a charity concert for him in Neum, because there had already been a country-wide action to gather funds for his surgery, led by Caritas, so we also wanted to participate. The concert was held and we gathered a certain amount of money. We then delivered the money, and the feeling you get when someone sincerely thanks you, is simply a feeling that you want to relive.

It simply took its course. While I was studying, I met some friends that were singing in choirs, and I started socialising with them. I liked the music and then I started a female choir in Neum that I led for six to seven years. Then we also established another, younger female choir, a group of 6 or 7 girls that also sang and attended the most renowned festival in Omiš, festival of choirs in Brač, etc.

We toured the whole Bosnia and Herzegovina and Croatia, attending various festivals and concerts. Whenever we would organise a concert, there would always be a charity aspect in order to help someone. We are very proud of this, not just me, but rather my whole team. One example is the concert we organised to help one of our citizens, Željka Krešić, who unfortunately died. She was born with epidermolysis bullosa and she really suffered for years. We organised a concert then, without expecting that we would gather so much money. I think it was around 12,000 or 13,000 KM in a hall with 300 seats.

As we started working with choirs, we initiated a parade of choirs in Neum, which was attended by some of the best choirs from all parts of Croatia. God willing, next year we will have the tenth anniversary of the choir parade.

I had the wish to go to a third world country. I did not have a specific idea as to where, I just wanted to go and see what life is like there, I thought that maybe I would appreciate more what I have here. And I chose Tanzania. In mid-January 2016, I went to Tanzania for a mission.

They were building a house; the mission was about to be established. I was wondering how I might help them and that was when I started teaching the youth and children how to play. There were around 20 of them every day for morning and afternoon classes. When I was leaving after a one-month stay, I promised I would be back next year.

When I came back to Neum, I organised a charity action. My late mother used to make pastry. When I remember some birthdays, weddings, any kind of festivities, one could not pass through the house, it was filled with baking trays full of cakes, so that she would lock the house when she made the cakes. In such a case one would have to knock and she would open the door in order to prevent someone from knocking down the cakes. I therefore wanted to do something in her honour and I organised an amateur pastry competition ”Jadranka’s Cup”.

When all of this ended, my next trip to Tanzania was from the money we gathered. We bought them a keyboard and some other things and left them some more money, so that once they have a room, they can invest the money to equip the room based on their needs.

Are you planning to continue doing charity work?

Exactly what I said, the first concert we made. It might be a bit selfish of me, because one should not be helping someone in order to have a feeling of having helped someone. But that is simply a beautiful feeling when one does not expect anything in return and gets only a simple thank you. And that is a sufficient motive and drive to continue doing it.

This year, for example, we organised an event entitled ”A book is not food, but it is a delicacy”, in the frame of which we promoted the opening of a city library in Neum. There were 2-3 activities, where we organised a children’s puppet show, a play for adults and a photo competition called ”Catch me while I am reading”. The entry ticked for all these events that were promoted was a book. We listed all the books, I think that we gathered around 1,000 books. In a room, we made shelves, a desk, so that we can archive around 3,000 – 4,000 books there. We are planning to gather around 2,000 – 3,000 books and to then open it for the public. But it would not be a typical library, it would rather be some sort of an online library.

We would, of course, once we furbish the premises, use the library to organise various other activities. A friend who is doing all the projects together with me is a student of graphic design and she will organise a Photoshop workshop, a painting workshop, etc. I should start a computer course for elderly persons, some already know about it. In Neum, we have very good university and secondary school students, grammar school students, etc., that I spoke to and that are willing to offer to teach in their free time in these premises. For example, there is a girl with excellent knowledge of chemistry, physics and mathematics, there is a girl with excellent knowledge of languages, so we can organise various trainings. Of course, all of that would be voluntary.

Everything that you are mentioning – do you see yourself over the long term in Neum? Have you thought about going and living somewhere abroad because of better living conditions?

You know what I will tell you – and this is something that many of my friends already know. My only dream would be to dedicate my time to social and cultural activities. Of course, one has also to earn for a living. Thank God, I work now and I have a job that allows me to engage in these activities after work. The thing is that it is just a phase. So far, the support of some entrepreneurs and the local administration has not been ideal, but it has been sufficient in order for us to get organised. Of course, sometimes there is a situation, and we have been there, where one simply organises something and has the support of volunteers, but then the authorities are a bit … and sometimes that is great. However, it might happen that I get fed up with it, I might not leave, but I will not organise it if there is no interest. Then one also considers the other aspect. I work as an IT technician at the hotel, and we all know that IT technicians are very sought after, especially if one specialises in a certain field. I will not say that I won’t. The way things are now; I would never leave. If I went somewhere, worked hard all day long in order to earn some money… what would I do with the money? I value more the time I spend with friends, organising, singing and socialising than all that money. Money comes and goes, but socialising with friends is important.

Everyone is telling me – only once one grows old, one regrets that they did not have more time for friends and family, so that I do not want to miss these things. But one never knows where life might take them. The way things are now, I see myself in Neum, but we will see what will happen.

Jasmin Sirčo – Visoko: Architecture is the basis in all projects...

Cyber Bosanka - August 31, 2017 0
Hana: Jasmin Sirčo is architect by profession. He works in Visoko, in a family firm, and architecture is his greatest love. We talked about his...