Cyber Bosanka
Home English Moms of HNK Neum – played a football game for those who...

I read about what they did in the media, and this motivated me to reach out and get to know them. However, talking to them and learn first hand how the idea had been engendered and how it was implemented in seven days was a privilege that I am really thankful for. I will remember this coffee time as long as I live. Namely, moms of the HNK Neum got an idea to play a humanitarian match. They all knew each other, because they have been bringing their sons to practice and accompanied them to games. This is how they all came to like football, and that is what motivated them to choose the game of football.

These 30 totally different women got organized and, in seven days, after two practices, held the match, which ended in a draw – due to two penalties caused by handling the ball. They told me how those seven days had been filled with laughter and tears – but tears from laughter. Because, pretty much none of them are athletic, some didn’t even own sports shoes, so they did practice in high heels or in wedge shoes. I laughed as they told me how they husbands had gone crazy during thoe seven days, because they created a chatroom on the Facebook Messenger, so notices chirped for all of them 24/7.

They also told me how everybody came to support and watch – from their children, who chanted at half time: „Mama, we are hungry,“ to their mothers-in-law with supportive placards, as well as to all neighbors, acquaintances and all those who recognized in their initiative an honest desire to make something different and something for someone else.

They told me how they were surprised at the size of the goal, and how, during the game, they needed to turn back a fellow player, because she was taking the ball towards her own goal :D And how they accidentally mentioned sweets, so they made sweets for the audience, which their children distributed at half time.

And how their biggest problem was that, due to all the laughter, they could not stay fit to run. And how they nearly drove their coach crazy as 30 of them talked at the same time.

And how their husbands and children were proud. True, they say that older kids had been suspicious at first, pride came after the game.

What mattered most to them was that they were all of different ages and interests, but this idea and a desire to do something brought them together, and all those differences were put aside. They also collected funds, which they have been using to help those in need. And, best of all, they have discovered the willingness to continue with their activities, because they realized how much they can do and that, together, they can create small miracles. That is why they are founding an association which, I have a feeling, will do a lot of good for Neum, so everyone will be better off.

When they asked me, several times – why I was so interested to tell their story, let me respond here too – because they were the best prof how little it takes to make something great, simply if you approach it with your heart. And this is the essence of what I keep trying to promote and demonstrate and I am unbelievably happy that I have had a chance to meet them.

Your organized a humanitarian football match. Can you tell me how the idea even emerged to do something like this?

The idea came up during our children practices, in conversations that moms, too, could do something. Simply, a call went out, „Let’s have a coffee together, to see what we can do, how we can do it,“ with disbelief about the chances of success. However, quite a few moms responded – 30 women came. The game was arranged quickly, it took place, with a large audience, our children, husbands, families, parents, fellow citizens… supported us, which we, to be honest, had not expected, but it was really wonderful. Some funds were also collected, which we also did not expect, because it all went like, „What are we going to do, how are we going to do it, where are we going to do it,“ but, in truth, our hearts are full now.

You took the match very seriously, you held practice and support of a coach?

Our coach really gave us a lot of support. He believed from the start that this could turn out to be great. The practices happened in the week before the game, because, while I can’ tell you exactly, but I believe it all happened in 7 days, from the idea to implementation. Moms in sports shoes for the first time, not even in cleats. For the first time with the ball. Far from it that we had not watched and accompanied our kids, but none of us, I think, played before. 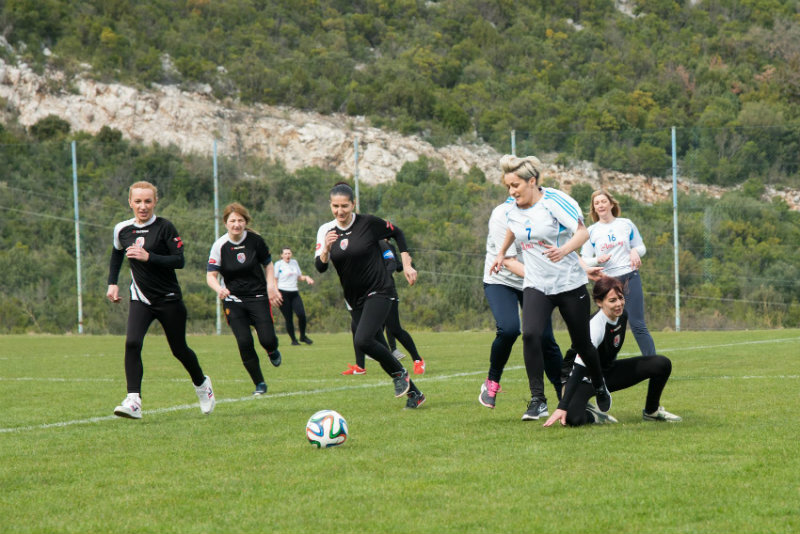 How did children react?

Younger children were delighted. Teenagers were afraid that moms would embarrass them, but they didn’t. Youngsters were really thrilled. That day they wore their team outfits, they cheered for their moms, were proud of their mom. I believe we did not embarrass them, that they truly liked it.

They will not mind if you played a rematch?

No, I believe they are looking forward to it.

You have plans to continue with your humanitarian initiatives, to get more active?

Yes. We are planning to set up an association that is going to be purely humanitarian in characted. Neum is a small town. We are not saying that we are going to be helping only the people in Neum. There are also destitute people here, as well as elderly and young families. We are really going to try to help our citizens in any way we can. But we are certainly here to help anyone else who needs help. Really, we are going to do ourbest.

In general, you will not be just playing football, there will be other activities?

There are other activities we are planning. Allow me not to reveal them, let them stay our little secret. We are planning something. Our first step is to set up an association and to make it all look serious. And also, Christmas is coming, the New Year, I think something more needs to happen before the winter sets in.

Mladen Ćajić, painter from Sokolac: „My greatest desire is to pursue only painting”

Nevenka Filipović: On the women’s vocal association “Emptianae Žepčanke” – a...

Cyber Bosanka - August 12, 2017 0
Hana: Nevenka Filipović is a member of the women’s vocal association “Emptianae Žepčanke”. The name Emptianae is a Latin name for Žepče. I talked to...