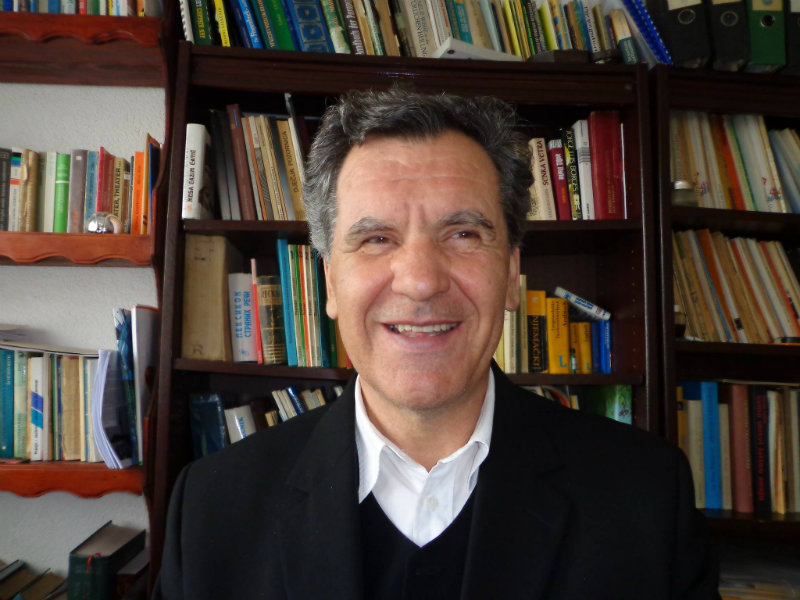 Before I met Nurija Delić, a teacher, I had found information about him online, that he was the author of several books and that he had an interesting personal story. Luckily, he had time to see me in Modriča, and I have good impressions of our meeting and several books that I cannot wait to read.

Nurija is a retired teacher. He used to teach Serbian and Croatian language, then Bosnian language and literature. He worked at the grammar school in Modriča, and then he went to Germany, to Berlin, in 1988. He spent full 10 years there. During the war, he was the founder of a Bosnian grammar school in Germany, which was open while he was there. He came back to Bosnia and Herzegovina in 1998. In Modriča, at his old school, there were no free positions for him, so he spent two years working in Visoko, and then in Gradačac, where he also retired.

He is a very active member of the community. In Modriča, he also participated in the establishment of the Bosnian Cultural Centre, where many activities take place, in spite of the fact that the centre does not have its own premises. They managed to issue a re-print of the edition of songs of Avdo Karabegović Hasanbegov, a poet from Modriča, and make a monument for the poet that he deserves. They have many other plans, which are limited by funds and their implementation depends only on them.

Nurija published several books so far, and there are other four books that are ready to be published. Their publication depends on funds, but he hopes, and I hope as well, that the obstacle will be overcome and that they will see the light of the day and make future readers happy.

So far, you have published four books?

Three books. I do not publish often, but I do believe that what I publish is of high quality. There are four new books now. The only reason why they have not been published is a lack of funds.

All of them are ready, already written?

Absolutely. One is called ”Pjesma nad pjesmama”, the other is ”Savremena basna”, the third is ”Šeret Revo”, and the fourth is ”Bosanska imena i prezimena”. The fourth one should be enormous, more than 500 pages, and it is also absolutely ready, there are maybe 5-6% to revise, and the other three are almost ready. ”Šeret Revo” should be some sort of a novel, because it has the characteristics. I hope, and this will be also visible based on the afterword and preface, that what I write, will remains, be carved in stone and permanent. There is nothing else to be done with such a text and words.

I do not publish much, but I fully support the things that I do publish. Every of my words and sentences has been analysed hundred times from all aspects. My literary models are Dostoyevsky, Borges and Proust. I like them.  How can one write a baseless sentence, while watched by Borges, Proust, Dostoyevsky? I therefore think that there is something in the books, something remained, and I particularly hope that this is the case with my four new books. But now it is difficult to find funds to print them.

You mentioned that you started a Bosnian grammar school in Berlin.

That was the first case that a Bosnian grammar school was established outside of Bosnia and Herzegovina. I knew what there was in Berlin, it has a strong culture – 52 theatres, 100 cinema theatres… I knew that there was a French grammar school, English grammar school, why shouldn’t there be a Bosnian grammar school, given the fact that there were 30,000 Bosnians and Herzegovinians. And they were all young men and girls that could not enrol anywhere in Berlin. I therefore spoke with the Volksschule. I am still fluent in German, I read in German, my English is less good. And they said – why should it not be established, the City of Berlin disposes with this and this sum. And a month later, we were doing it – I published a notice, a sufficient number of students applied…

What year was that?

It was in 1993. The grammar school operated for 5.5 years. When I went away, it immediately stopped operating.

Yes. We do not have a building or funds. Last year we got 500 KM from the mayor for a monument that cost 2,500 KM. And this year we did not even get a dime. The year before last we printed a new issue of Avdo Karabegović Hasanbegov from 1967, the issue that was printed by Alija Isaković.

We wanted to achieve much more, and we are working on this – Days of Avdo Karabegović Hasanbegov in Modriča, which would last for a couple of months. A competition in Bosnia and Herzegovina, or maybe even in the region – Bosnian, Serbian, Croatian and Montenegrin, in order for young poets to apply. We as a steering committee would define who can apply. And then we would decide who would come first, second, third, how many persons applied, etc.

That would be a cultural event for Modriča, Posavina, the whole Bosnia and Herzegovina. People here are into culture, we are not just living from day to day.

Gordana Vidović: Association of citizens ”Budućnost” Modriča, an association that initiates and lead important changes in the society

A few thoughts after reading “Everything That Remains: A Memoir by...

Cyber Bosanka - September 4, 2016 0
Author: Hana Kazazović I’ve read the book “Everything That Remains: A Memoir by the Minimalists” by Joshua Millburn, one-half of The Minimalists. And I have to...